2021 Chrysler Aspen Could Come Next Year!?

Despite that rumors about Chrysler’s new SUV have been circulating around for a couple of years, we still haven’t heard anything from the officials. The latest unofficial reports suggest that the company is about to use a familiar nameplate. Allegedly, the new model would arrive next year, as the 2021 Chrysler Aspen. At this point, rumors are mostly about the name and similar things. On the other side, technical details are still a complete mystery.

Therefore, we can only speculate about the design of this SUV. At this point, there are two ways the new model could go in terms of design. One is to see a Pacifica-based SUV, while the other suggests the usage of Alfa Romeo’s Giorgio platform. In any case, the following paragraphs are pure speculation, take the following paragraphs with a big reserve.

One of the possibilities for the new 2021 Chrysler Aspen is to see a design that is based on the Pacifica minivan. The popular minivan rides on a familiar Compact US Wide platform. It measures more than 121 inches in wheelbase, which seems like a perfect measure for a flagship SUV of this brand that tends to be treated as a premium. The Pacifica has just received an AWD version, which makes things even more likely.

Still, the potential issue with this design approach is that we are talking about an FWD platform, and we have no doubt that most drivers would rather like to see something that features an RWD layout in the base version. Of course, higher trim levels would certainly come with all-wheel drive.

When it comes to the styling, we presume that the new 2021 Chrysler Aspen would share a lot of things with the recently-updated Pacifica, as this looks like the brand’s new design language that should be used in the following years.

This is another possibility for the 2021 Chrysler Aspen and it looks way more interesting in our eyes. This platform is already in use, for models like Alfa Rome Stelvio and Giulia. Furthermore, it will underprint the next-generation Grand Cherokee, which is on the way.

The benefits of this platform are obvious. First of all, we are talking about an RWD platform, which guarantees a better driving experience. Furthermore, the new model would be much lighter with this architecture. Also, the current Stelvio offers really impressive handling and driving characteristics, so the 2021 Chrysler Aspen should get a bit of it as well.

If this happens, we presume that the new SUV would have most things in common with the upcoming next-generation Grand Cherokee. This primarily refers to mechanics, but we expect to see quite a similar overall size as well.

When it comes to interior design, one thing about the 2021 Chrysler Aspen is certain. This would be a pretty big SUV and there is no doubt it would come with three rows of seats. Furthermore, the wheelbase would go over 120 inches, which promises a generous third row as well. Furthermore, the cargo area should offer some pretty respectable numbers as well.

When it comes to the dashboard design and overall quality, we expect that the new SUV will be on a pretty high level. Chrysler has always been a brand that tends to be considered premium. Therefore, materials and aesthetics should be pretty amazing, though not exactly at the same level as German and Japanese luxury rivals. We presume it would rather be on par with Grand Cherokee and some Buick and Lincoln models. Naturally, we count on a long list of tech features, which would certainly make things look more luxurious.

When it comes to the powertrain, we count on a wide choice of different options. For example, the base model would probably come with a familiar 3.6-liter V6 Pentastar engine, equipped with a mild-hybrid eTorque system. We count on a 2.0-liter turbo-four as well. Higher trim levels should come with something more powerful and familiar HEMI engines are some of the first that comes to mind.

Besides powerful V8 HEMI units, another thing you should consider is that FCA is working on a new turbo six-cylinder engine, which should come in several output variants. According to some reports, the most powerful variant will feature max output of around 525 horsepower. More details should come in the near future.

As we already mentioned, the 2021 Chrysler Aspen is still just a rumor. Therefore, even though some sources suggest its arrival in the next year, we suggest you take these rumors with a reserve. More details about the price and launch date will be known after we hear some words from the officials.

Previous 2021 VW T-Track: The Smallest Crossover In the Lineup
Next 2021 Volvo XC70 is Entering 4th Generation with Improved Power Specs 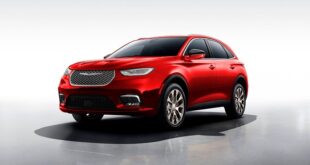