The new, third generation of the three-row SUV is here. Although a not particularly familiar nameplate in North America, the Everest is a pretty popular SUV in Australia, South Africa, South East Asia etc. Just like the previous generation, the new model also shares most of its parts with Ranger. So, you may count on improvements in various aspects, which should make this SUV even more competitive in the segment where some of the key competitors are models like the Toyota Fortuner and Mitsubishi Pajero Sport. The new model debuts as the 2023 Ford Everest.

Compared to the previous generation, improvements are numerous. First of all, there is a completely new, much more attractive styling, while the interior has been revised too. The new model brings improved ride quality, along with improvements in off-roading as well. Finally, there is a generous engine lineup, which includes three diesel and one petrol unit, so we could say that the new Everest is ready for every market where it is available.

As we’ve just mentioned, the new 2023 Ford Everest is also heavily based on the Ranger pickup. Just like the new pickup, it also received a full redesign, which brings novelties and improvements in various aspects. First of all, we should talk about the platform. Even though the new model still rides on the T6 platform, this architecture has been updated and upgraded significantly, with new technologies and a new suspension setup.

Of course, the styling is the first thing you’ll notice on the new 2023 Ford Everest. It’s been revised completely and it’s pretty easy to notice that there is a lot of design solutions shared with the new Ranger. This particularly refers to the front end, which looks nearly identical. You can notice the same C-shaped LED headlights, along with the same grille and bumper, while the boxy look is also a thing that characterizes both of these models.

The new model features slightly bigger dimensions. We particularly like that the track is notably wider, by 50mm or nearly 2 inches, which has a highly positive effect on stability and overall ride quality. The wheelbase is longer too, while the new suspension setup ensures better towing capacity as well. The new model can go 2.5 feet deep into the water, which is just a few inches less than the new Ford Bronco.

Of course, there is also a completely new interior design, which looks way more car-like than before. The new model finally has a quality cabin, which utilizes fine materials and comes with the great build quality. Furthermore, we really like the long list of standard equipment, particularly in terms of tech goodies. Base models come standard with a 10.1-inch vertically-oriented touchscreen, which comes with the latest SYNC4 software. Higher trim levels come with a bigger 12.0-inch unit. Also, base models come with an 8-inch digital gauge cluster, while more expensive models can be packed with a massive 12.4-inch unit.

As we’ve already mentioned, the new model is bigger and, therefore, also more spacious from the inside. The new model continues with seven seats in standard configuration and the overall impression is that the third row offers a little bit more legroom than the previous generation. At the front, you can notice new seats, with new upholstery and more accentuated side support.

The 2023 Ford Everest comes with four powertrain options in total. Of course, the focus will be on diesel units, so you can see three oil-burners on the offer. The first one is a familiar 2.0-liter unit with a single turbo, which puts out 125kW and 405Nm of torque, which would be around 170 horsepower and 300 pound-feet of torque.

The same engine is available in a version with a twin turbocharger. That engine puts out around 154kW and 500 Nm of torque, which equals 207 horsepower and 370 pound-feet of torque.

The good-old 3.2-liter turbodiesel has been dropped and the replacement comes in the form of the 3.0-liter six-cylinder unit, which powered the F-150 as well. This engine puts out 250 horsepower and 450 pound-feet of torque, which would be around 186kW and 600Nm of torque.

Finally, a 2.3-liter turbo-four will be available in some markets, with a max output of 270 horsepower.

We expect that the 2023 Ford Everest will hit most markets in the second half of the year. 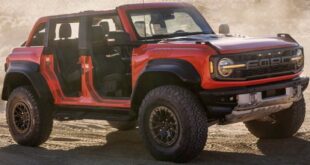 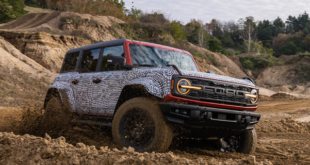 A year ago, Ford revived the legendary SUV and if we consider that the next …