The new generation of the popular subcompact crossover is on the way and we have big expectations from it. Even though the current model is the best-selling model in the class, the Japanese manufacturer decided to go with big changes for the next year, instead of offering evolutionary changes. Another interesting thing about the new 2023 Honda HR-V is that the U.S. version will look significantly different compared to the European version, at least in terms of the styling.

We are about to see significant changes in all aspects, starting from a completely new platform. Furthermore, the new generation will get bigger and come with more capable engine options. We count on notably more passenger space, as well as on an even more generous cargo area than before. The 2023 Honda HR-V will come packed up with a full load of technologies, whether it’s about tech or driver-assistance features.

The new generation is expected to arrive sometime in the second half of the year.

The 2023 Honda HR-V will receive a complete redesign and from what we can see and hear, changes will be significant. First of all, the new model will ride on a completely different platform. While the outgoing model rides on the same platform as Honda Fit, the new one will share the platform with the 11th-generation Civic. In other words, it will be a much more serious vehicle.

The new platform means notably bigger dimensions. This also means it will be notably bigger compared to the European version of the new HR-V. Count on a longer wheelbase and a bigger overall dimension. A close relationship with the Civic also means significant improvements regarding suspension setup. Just like the Civic, the North American 2023 Honda HR-V will also feature an independent rear suspension, which will have a significant impact on the ride quality.

When it comes to the exterior design, the first thing we should mention is that the North American model will look nothing like the European model. First of all, it will be notably bigger, with dimensions that are pretty close to the outgoing CR-V. This particularly refers to the wheelbase, which will provide notably more space on the inside.

Of course, there is the matter of styling, which will also be significantly different compared to the version across the Atlantic. There is a completely new front end, with headlights that resemble the new Civic. The grille is small and looks pretty sporty with that massive mesh pattern, while the bumpers are sharp and aggressive. The overall contour is sleeker than before and provides a much sportier look, especially if we look at that long hood from the side.

When it comes to the 2023 Honda HR-V interior, the new model will benefit a lot from its close relation to the new Civic. We expect to see a pretty similar dashboard design, with a clean design with a lot of straight horizontal lines. Of course, we also count on a similarly designed, tablet-like infotainment screen, along with the same digital instrument cluster.

The current HR-V is one of the most practical small SUVs on the market and we expect nothing less from the new generation. Moreover, the longer wheelbase should ensure more legroom for the passengers, especially in the second row. The cargo area should be as spacious, if not even bigger and more practical.

At this point, we know for sure that the current 1.8-liter inline-four with 141 horsepower will be replaced. However, we still don’t know which model will come as a replacement. That could be a good-old K20 engine from Civic, which currently puts out 158 horsepower. Besides this naturally-aspirated engine, there is also a chance for a turbo-four. Of course, in that case, we would see a 1.5-liter engine with a max output of 180 horsepower. In both cases, the new HR-V would come with a CVT gearbox.

We also expect to see a hybrid version of the new HR-V. In Europe, the new HR-V comes with a system based on a 1.5-liter inline-four, with a combined output of 131 horsepower. However, we believe that the North American version would rather come with something more powerful, probably with the same system as the one that powers the CR-V, with a 2.0-liter engine and a max output of 212 horsepower.

We believe that the 2023 Honda HR-V will arrive sometime in the last quarter of the year. At this point, the price is still a mystery but we estimate that the base model could cost around 24.000 dollars. Key competitors will be models like Subaru Crosstrek, Hyundai Kona, Mazda CX-30 etc. 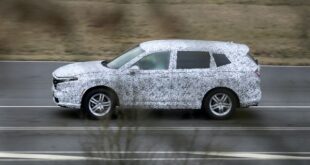 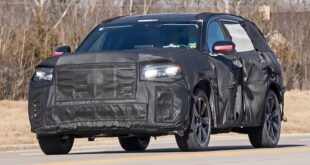 Honda’s flagship SUV has been around for a while and it’s time for changes. The …