The QX55 came last year as a completely new model but somehow, it already feels a little bit old. The main reason is in the fact that this is essentially the same vehicle as to the QX50, apart from the sloping roof design, which has been around for some time and definitely needs some updates. Unfortunately, the 2023 Infiniti QX55 won’t get updates. It will represent the second production year, so the best we could see are minor updates in terms of standard and available equipment.

All in all, you may count on familiar pros and cons. When it comes to things we like about this crossover, the first thing that comes to mind is a long list of standard equipment. Also, we really like the seats, which are, typically for Infiniti, among the best in the class. On the other hand, there is also a pretty long list of complaints, starting from the unrefined ride, lack of athleticism, outdated infotainment system etc.

As there are no bigger to come for the next year, we presume that the 2023 Infiniti QX55 will hit the market sometime in the last quarter of the year.

This will be the second production year of this coupe SUV. Therefore, the overall design will certainly remain the same. As we already mentioned, most of the features and design solutions are shared with the QX50. The mechanics are pretty much identical, not just in terms of the platform, but in terms of the suspension setup as well. As a result, the driving experience is pretty much the same. The QX55 looks sporty but isn’t particularly sporty in terms of handling. This is one of our biggest complaints.

On the other hand, there is nothing to complain about regarding aesthetics. This SUV follows the brand’s latest language and looks really impressive. It is sleek and elegant, while the sloping roof design makes it look even sportier. The next year, won’t bring styling changes, though we wouldn’t be surprised to see things like a new appearance package, in order to improve sales numbers.

Once again, you will find a lot of things in common with the QX50. The dashboard looks largely the same and it is highlighted by a couple of touchscreens, which have been Infiniti’s thing for a long time. That’s why the cabin looks a little bit older compared to the competition. The build quality is good, the materials are very good but somehow, other models in class look more opulent.

When it comes to the passenger space, both rows of seats offer plenty of legroom, thanks to the long wheelbase. The front seats are also impressive in terms of comfort and support. On the other hand, the rear seats lack headroom, due to the sloping roof design.

For the same reason, the cargo area offers below-average numbers for the class. You may count on about 27 cubic feet behind the second row and 51 cubic feet behind the first row. Although below class average ratings, this is still more than you get from similarly designed coupe SUVs like BMW X4 and Mercedes-Benz GLC Coupe.

We don’t believe that the 2023 Infiniti QX55 could bring bigger changes in this aspect, especially if we consider that the current model already stands pretty well in this aspect. It comes standard with goodies like a sunroof, dual-zone climate control, keyless entry, remote start, 8- and 7-inch touch screens, wireless Apple CarPlay and Android Auto, Bluetooth, four USB ports, a six-speaker stereo, satellite radio, and a Wi-Fi hot spot. The list of options includes tri-zone climate control, a navigation system and a 16-speaker stereo.

The 2023 Infiniti QX55 will continue with just one engine on the offer. That would be Nissan’s well-known 2.0-liter turbo-four, which puts out around 268 horsepower. That’s more than you get from most other compact crossovers with turbo-four engines but the max power isn’t the only quality of this unit. We also like the fact that it comes with variable compression, which ensures pretty good fuel economy. It goes around 22 mpg in the city and 28 mpg on the highway.

On the other hand, the biggest issue is that the engine comes paired with a CVT, which completely kills the fun. Furthermore, base models feature front-wheel drive, while all-wheel drive is available as an option.

We expect that the 2023 Infiniti QX55 will hit the market sometime in the last quarter of the year, with a starting price of around 47.000 dollars. 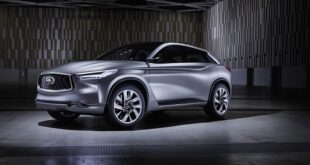 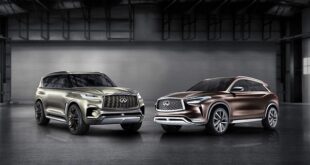 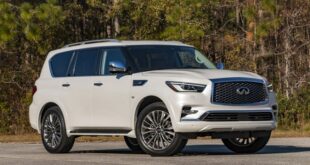 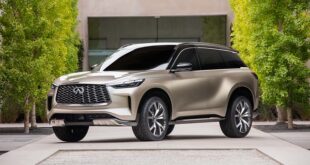