Although not available in North America anymore, the Commander nameplate is still used for models around the world and the latest reports suggest it will be offered in Japan again. The 2023 Jeep Commander will be offered in the Land of the Rising Sun, though it won’t have many things in common with the previous iteration that was sold in this part of the world.

Instead, the new Commander will be pretty much the same vehicle as the Commander that is sold in Brazil. That model was introduced last year and it is a relatively small vehicle that still manages to pack three rows of seats.

At this point, it is still unknown how different it will be compared to the South American version. On the other hand, we know it will be produced in India, in Jeep’s well-known plant in Pune, Maharashtra. The Japanese version is expected to debut by the end of this year.

As we’ve just mentioned, the 2023 Jeep Commander will debut in Japan and the new version will be pretty similar to the Brazilian model. We count on the same overall design, which is heavily based on the compact Jeep Compass. It rides on the same platform, though it features notably bigger dimensions. The wheelbase goes up to 110 inches, which comes pretty close to the mid-size segment.

In terms of styling, the Commander is a little bit different from the Compass. It looks a little bit rugged and bolder. More precisely it shares some aesthetical solutions with the new Grand Cherokee and it definitely looks very appealing. At this point, we don’t know if the Japanese version is about to feature some exclusive styling details or not.

When it comes to interior design, we don’t expect significant differences, though the list of standard and available equipment, as well as the organization of equipment groups, will probably be different. The Commander looks pretty similar to the Compass from the inside. This particularly refers to the dashboard design, which is pretty much the same as in the compact crossover. It looks very elegant, thanks to the quality materials and nice color schemes, while there is also a decent amount of tech and convenience features, which makes everything look even more upscale.

Speaking of tech features, we expect that things like a 10.25-inch digital instrument cluster and a 10.1-inch infotainment screen will be standard. Furthermore, we count on wireless Android Auto and Apple CarPlay, while things like a premium Harman Kardon audio system should be available, just like Amazon Alexa, panoramic sunroof, 12V sockets, hands-free tailgate etc.

At this point, details about the Japanese-spec version are still unavailable, but we don’t believe things could be significantly different compared to the Brazilian-market version. So, base models will probably come with the same 1.3-liter turbo-four engine, which features a max output of 185 horsepower and 270 Nm of torque. Also, there is an optional 2.0-liter turbodiesel, which puts out 170 horsepower and 380 Nm of torque.

We expect to see both FWD and AWD versions on offer. FWD models should feature a six-speed manual, while AWD models will come paired with a 9-speed automatic. Of course, we are talking about Jeep’s well-known Quadra-Trac all-wheel-drive system, which features a two-speed transfer case, various traction control modes and other off-road goodies, such as differential lock, hill descent control etc.

We expect that the 2023 Jeep Commander will arrive in Japan by the end of this year. When it comes to the price, the Brazilian versions start at around 200.000 Real, which roughly equals $38.000, while range-topping models can go all-away up to 53.000, when converted to American Dollars. 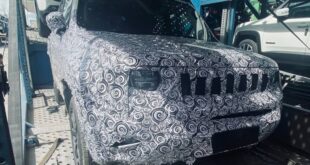 2023 Jeep Renegade Will Get Another Facelift

The current generation of Jeep’s subcompact crossover has been around for a pretty long time, …