The new generation of Honda’s popular three-row crossover is here. The 2023 model year brings a completely redesigned, fourth generation of this model and we can see some pretty significant changes. Of course, there is the new styling, along with a much nicer interior. There are also new tech and convenience features, which all indicate that the 2024 Honda Pilot would come without bigger changes. That’s what we expect to see as well, but we can’t neglect rumors that suggest an additional powertrain option for the second production year. Some sources speculate about a hybrid powertrain, while others talk about a high-performance version.

In any case, the overall layout won’t change and the 2024 Pilot will continue with the same overall design, which now brings a bolder and more rugged layout. We like how the new Pilot drives, as well as the new cabin layout. The engine is a proven and well-known V6, which features a few more horsepower but comes with a new transmission.

The 2024 Honda Pilot should arrive sometime in the last quarter of the next year.

With a new powertrain option or not, the 2024 Honda Pilot will continue with the same overall layout. The recent redesign has brought a lot of changes. One of them is the new styling, which looks more aggressive, and more rugged. The new generation feels bolder but it also brings bigger dimensions. The wheelbase gets additional 2.8 inches, which is most notable in the second and third rows of seats.

While the styling feels like a big departure from the previous generation, the mechanics are pretty similar. The engine is the same, while the chassis and suspension bring evolutionary upgrades. The feeling behind the steering wheel is similar, though we can notice more direct handling and slightly less body roll. All in all, the new Pilot is easy and very pleasant to drive.

One of the most interesting novelties we saw with the recent redesign is the addition of the new TrailSport trim. This version brings a little bit of off-road flavor, with visual upgrades like the blacked grille, black fender surroundings and a few more details that make this version more rugged than a regular Pilot. Also, there are a few off-road upgrades, starting from the 1.0-inch suspension lift. The suspension has been retuned, just like the all-wheel-drive system, which adds Trail drive mode. Furthermore, you can notice protective skid plates, all-terrain tires and hill-descent control.

This aspect definitely won’t bring any notable changes, as the new cabin looks pretty amazing. The new dashboard design sticks with Honda’s new design approach, so you can see a lot of similarities between models like the CR-V and the new Civic. However, the Pilot feels even more elegant and even more upscale, thanks to finer materials, more attention to detail, some exclusive design solutions etc.

The cabin is also more spacious than before. As we already mentioned, the wheelbase is longer, which resulted in more legroom in the back rows. The front seats feel kind of familiar, which is great. This SUV offers decent seats, with plenty of space, while the driving position is excellent. The second row is also very spacious and accommodates adults with ease. Finally, the third row offers a little bit more space than before but still feels typically tight for the segment.

As we already mentioned, rumors suggest that the 2024 Honda Pilot could come with a new powertrain option. Some of them speculate about a hybrid version. Allegedly, the Japanese manufacturer would offer a plug-in hybrid setup based on a turbo-four engine, with around 300 horsepower.

Other sources speculate about a high-performance version, which would come with a 3.0-liter turbo V6, the same one that powers the Acura MDX Type S, with a max output of 355 horsepower.

We can’t say if these scenarios seem likely or not but we have no doubt that base models are about to continue with a 3.5-liter V6, which puts out 285 horsepower and 262 pound-feet of torque. The overall performance is more than decent, while we particularly like the level of refinement this engine offers. Also, there is a new 10-speed automatic transmission, which works better than the previous 9-speed unit. Base models come with front-wheel drive, while an AWD system is available.

We expect that the 2024 Honda Pilot will arrive sometime in the last quarter of 2023, with a starting price of around 40.000 dollars. 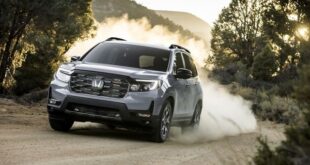