This year started great for Nissan’s flagship SUV. In just three months, the company sold more Patrol than for the while 2021, which clearly indicates that there is still a large number of buyers who look for a genuine off-roaded, rather than a unibody crossover. Still, this excellent sales record won’t change the previously established plans. The legendary nameplate, which has been around since the 1950s, will get a new iteration in the next year. According to the latest reports, the new generation will hit the market sometime in the next year, as the 2024 Nissan Patrol.

As you may presume, the new generation will come with the Y63 codename and from what we know so far, it won’t bring too many radical changes. Of course, the overall layout will remain the same, and that refers to the platform as well. On the other hand, a big change will come under the hood, where the good-old V8 will be replaced with a smaller turbocharged V6 engine.

We expect to see the all-new 2024 Nissan Patrol sometime in the second half of the year.

Despite the great sales numbers this year, the Patrol needs a refresh so it can compete with the recently redesigned Land Cruiser 300. Therefore, the 2024 Nissan Patrol is about to receive a full redesign and from what we know so far, most changes will be evolutionary.

This primarily refers to the platform. The new model will continue to ride on a good-old F-Alpha platform but that architecture will be significantly updated and codenamed Y63. Compared to the outgoing Y62 model, we count on notable improvements, especially in terms of the ride quality, even though the focus will remain on off-road performance, which has always been the Patrol’s thing.

Of course, this redesign will bring a completely new exterior design. Although it is still early for predictions, we presume that some of the styling bits could carry over from the recently updated model. That refresh brought a completely new styling, which looks very fresh and competitive, despite that we are actually talking about a model that’s more than a decade old. Of course, we will also see a full load of new styling solutions, which would make this SUV more competitive.

On the other hand, we don’t believe that the 2024 Nissan Patrol could bring bigger changes in terms of size. We presume that dimensions will remain the same or be very similar to the current model. For reference, the current model features 3.075mm (121.1) inches in wheelbase, while the total length goes all-away up to 5.165mm or 203.3 inches. That’s plenty enough for a three-row SUV, while everything more than that would just compromise the off-road potential.

Interior design is probably the weakest point of the current generation. Simply, after 12 years of production, it’s natural that the current dashboard looks outdated, even though the recent update has brought the new infotainment screen and revised center console. All in all, we expect to see a completely new design, with more attractive aesthetics, more tech features and notable improvements regarding materials and build quality.

This will be one of the most interesting aspects of the next–generation 2024 Nissan Patrol. As we already mentioned, the current 5.6-liter V8 will be replaced and the replacement will come in the form of a turbocharged V6 engine.

At this point, details about the new engine are still unknown. Some sources speculate about the well-known 3.0-liter twin-turbo V6 from Q50 and Q60 models, but we think that the new SUV would need something with a little bit more torque. Therefore, we won’t be surprised if we see a 3.5-liter unit under the hood, while some sources suggest that the new 3.8-liter V6 from Frontier might get a turbocharged version for this occasion.

We believe that the 2024 Nissan Patrol will arrive sometime in the second half of 2023. However, the officials are still quiet about this redesign, so take this estimation date with reserve.

2023 Nissan Pathfinder Could Get Hybrid Powertrain 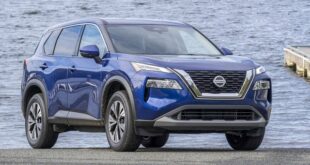 2022 Nissan Rogue Preview: Is There Any Chance For Hybrid?

Nissan’s compact crossover has just been redesigned and it looks like everyone likes it. Reasons …