As the world’s best-selling SUV, the current generation of Toyota’s compact crossover isn’t desperate for updates. We are pretty sure that the current generation will remain in production for a few more years. According to rumors, the next generation will arrive in about two years, which clearly indicates that the 2024 Toyota RAV4 will represent the final production year of the generation. Therefore, we don’t believe it could come with bigger changes. We count on a familiar layout and features.

That means that you may expect a well-rounded SUV again. The RAV4 is spacious and comfortable, while we also like its long list of standard and available features. Of course, there is also an impressive powertrain lineup, which includes some pretty capable and incredibly efficient options. On the other hand, the main complaint goes to a little bit outdated infotainment system.

As no bigger changes are expected, we presume that the 2024 Toyota RAV4 will hit the market sometime in the last quarter of 2023.

Despite that 2021 update, not many things have changed since the model’s initial launch in 2018. The overall design is still the same, based on the TNGA platform, which provided notable weight savings and improved handling, compared to the previous generation. The RAV4 is easy to drive and serves as a great cruiser. Although it’s more engaging than its predecessor, it still isn’t particularly fun to drive.

The recent update brought a couple of new styling details, such as LED projector headlights and new wheels. However, the overall styling is still the same and looks pretty fresh and attractive, despite the much younger competition. Considering that the 2024 Toyota RAV4 will probably represent the final production year of the generation, we don’t expect any notable styling changes. Still, we won’t exclude the possibility to see things like new color options, or maybe even a new appearance package.

Interior changes are definitely not expected. We count on the same cabin layout, which still has a lot of good things to offer. Of course, we like the style, as well as the materials. The build quality is also at a high level, which all makes this cabin look quite premium. The only complaint goes to the sound insulation, which could have been done better. On the other hand, the driving position and ergonomics are excellent.

The amount of passenger room is also pretty generous. The front seats are well-shaped and accommodate adults with ease. The second row is also very generous with leg- and headroom, so adult passengers can enjoy long journeys in this row as well.

The cargo area offers around 37.5 cubic feet behind the second row and nearly 70 cubic feet of the total cargo volume, which is very good for the class, though still slightly lower compared to the key competitors, such as Honda CR-V and Subaru Forester.

Considering that we are talking about probably the final production year of the generation, we presume that we won’t be seeing significant changes regarding the standard and available equipment. Therefore, base models should come standard with goodies like a 7-inch touch screen, Android Auto, Apple CarPlay, Amazon Alexa, satellite radio, a Wi-Fi hot spot, a six-speaker stereo, voice recognition, Bluetooth, and a USB port.

The 2024 Toyota RAV4 will continue with three familiar powertrain options on offer. Base models will continue with a good-old 2.5-liter inline-four, which puts out around 203 horsepower. The engine comes in pair with an 8-speed automatic transmission and offers pretty decent performance. Moreover, you may also count on very good fuel economy, which goes around 27 mpg in the city and 35 mpg on the highway.

The hybrid version will also continue with the same system, which puts out a combined output of 219 horsepower. The system includes CVT gearbox and offers pretty good performance. More importantly, fuel economy is pretty impressive, as you may count on about 41 mpg in the city and 38 mpg on the highway.

Finally, there is a plug-in hybrid version, known as the RAV4 Prime, which offers a total output of 302 horsepower. Besides excellent performance and fuel economy, you may also count on 42 miles of the all-electric range.

We expect to see the 2024 Toyota RAV4 sometime in the last quarter of the next year, with the starting price of around 27.000 dollars. The hybrid should start at around 30.000 dollars.

2024 Toyota Land Cruiser Prado Redesign: What We Know So Far

2024 Toyota 4Runner Is Finally Getting Redesign 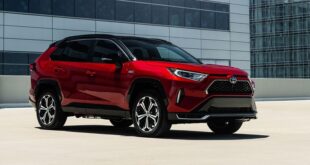