Ferrari SUV: Everything We Know So Far

The automotive world went completely crazy in the last decade, as most exotic carmakers started making hi-performance SUV. It all started with Porsche Cayenne, but these days, we have SUVs from manufacturers like Bentley, Aston Martin and even Lamborghini. So, it was just a matter of time when we’ll see such a vehicle from Ferrari. This model has been the object of rumors for years and it looks like it’s finally coming in the next year. While some sources suggest the Purosangue nameplate, we will call it Ferrari SUV for now, to keep things simple.

At this point, we don’t know the exact details of the Ferrari SUV. On the other side, some of the basic things are easy to predict. After all, we’ve already seen a lot of rendering photos, so it’s not hard to make a picture in the head. In any case, we have more than enough material to speculate about the new hi-performance luxury SUV.

Of course, the first thing we are going to discuss is the base design. The latest reports suggest that the Ferrari SUV is about to share a lot of things with a recently-introduced Roma. This model is one of the freshest in the lineup, so its new platform seems like a perfect choice for the new SUV. At this point, we are still waiting for the details, but it looks like the size won’t exactly be on par with models like Urus or Cayenne. Moreover, it looks like we are about to see a rather compact layout, which may make the cabin tighter, but it will definitely have a highly positive effect on performances.

Simply, the Italian carmaker wants to keep things light, as that is still the key factor for good performances. This particularly makes sense when we are talking about models with a higher center of gravity compared to traditional sports cars and supercars.

When it comes to the styling, it’s still hard to talk about any particular details, considering that the test mule is still to hit the road. Still, we can find a lot of rendering photos on the internet and pretty much all of them take a lot of inspiration from models like F8 and Roma. Withough any doubt, the Ferrari SUV will use some of their aesthetical solutions, particularly at the front. However, we are more interested in the profile and overall body shape. Most likely, we will see a sleek coupe crossover, with emphasized aerodynamics and a sporty look. More details should be known in the following months.

The same thing goes for interior design. As we are talking about a model that will cost hundreds of thousands of dollars, there is no doubt that the new model will utilize various kinds of hi-grade materials, including super-fine leather, real carbon fiber etc. The new model will come with two rows of seats but we are still unsure about the dashboard design, in terms of infotainment technology to be more precise. Simply, there are two possible directions. The Ferrari SUV could either feature the same layout as the F8, which packs infotainment features into the cluster, or stick with Roma’s more traditional approach, which includes a typical infotainment screen that is mounted on the center stack.

The powertrain lineup is still a complete mystery but if we can rely on the latest reports, the new Ferrari SUV could easily come with two or even more powertrain options in the offer. On one side, sources like Car and Driver suggest electrification. On the other, Motor1 speculates about a pure-gasoline, naturally-aspirated version, which would be reserved for range-topping models. At this point, we can only say that we expect both turbocharged V8 and NA V12 engines in the offer, whether these are about to get help from electric motors or not.

If we can rely on the latest reports, the Ferrari SUV will hit the market sometime in the next year, as a 2022 model. At this point, it’s still early to talk about the exact price, but some rough estimation would go around 350.000 dollars for the base version.

You can read a full review on Alfa Romeo Stelvio Q4 here. 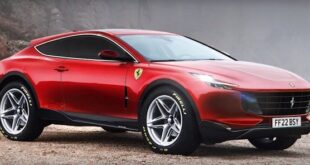 2022 Ferrari Purosangue: Everything we Know So Far