Nothing is a surprise when we talk about one of the leading carmakers in the world. After the CR-V and HR-V, the new crossover is going to hit the market. The company released a teaser image and very few details are available. For now, we know it will be a compact vehicle. According to multiple sources, the small SUV will be called Honda WR-V.

The Japanese company is going to unveil more details on November 2. But, don’t expect a full review. The production should start next year and the 2024 Honda WR-V takes the position under the HR-V. The carmaker offers a few options there. But, people want crossover and Honda is delivering. We’ve heard about the WR-V in Indonesia and India, so the vehicle will be available in those regions. Experts don’t believe it is coming to the US. The new model can’t meet the demands and requirements of the major automotive market in the world.

This is not the first time the Japanese carmaker shows the new vehicle. The Honda RS is a concept previewed in Indonesia a year ago. Back then, experts and enthusiasts expected it in production as the ZR-V. Nevertheless, it is obvious that Honda wants to compete in the mini B segment against Toyota Raize and Daihatsu Rocky. Now, the RS platform evolved into the WR-V.

The concept is showing a new approach in design. If there were no some trademark solutions, you might think this is Peugeot. Well, the small crossover can’t offer too much space inside the cockpit thanks to its size. But, the fuel economy is the strong side, and it can be a deal-maker if Honda goes with the hybrid configuration.

Under the hood of the new small crossover will be a small displacement. A 1.0-liter turbocharged three-cylinder mill is one of the options with 122 horsepower. Slightly bigger is a 1.5-liter mill. Without a turbo system, it can deliver a similar output. There is also an enhanced version, but the Honda WR-V is not getting so much power. The e:HEV technology is very likely. In this case, electric motors help a petrol engine achieve better fuel economy. Numbers are still unavailable since it depends on the size and weight of the final product.

The premiere of the Honda WR-V is set for November 2. The company will start producing the crossover pretty soon, and we can expect it as the 2024 YM. Sales could start already in mid-2023. Since the WR-V sits under the HR-V, the price should also be below. 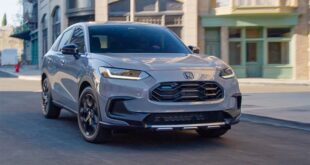 Back in the early 2000s, the Element was a brand-new model from Honda, designed in …