Skoda’s family hauler is about to receive a mid-cycle refresh, according to the latest reports. The testing model has been spotted and while it still wears camouflage, we know what to expect in terms of aesthetics. However, this update won’t bring just visual novelties. We count on new things under the hood, as the 2021 Skoda Kodiaq Hybrid has been rumored. On the other side, we don’t expect to see too many changes on the inside.

All in all, these changes won’t make a significant impact on the model’s overall design and characteristics. Most of the things are about to remain the same and that particularly refers to mechanics and suspension setup. Therefore, you may count on a crossover that is spacious and offers a well-designed cabin. The engine lineup is pretty wide, while the infotainment system works pretty well. This also means you may count on typical Skoda/VW issues, such as bumpy ride at lower speeds, dull styling and uninspiring handling.

As we’ve just mentioned, the overall layout won’t change. That means you may count on a vehicle that shares most of its parts with the stretched version of Tiguan (Allspace), which measures just a bit under 110 inches in wheelbase. That is a pretty impressive size for the segment but Skoda is generally known as a carmaker that gives most sheet metal for money.

In terms of the styling, the Skoda Kodiaq restyling 2021 will certainly bring a lot of interesting novelties. The testing model has been spotted on the road and despite that it still wears a camouflage, we presume that the new front end will closely resemble the latest iterations of Octavia and Superb, especially in terms of the grille and headlights. When it comes to the rear end, a pair of new taillights is what most reports suggest.

On the other side, we don’t expect more significant changes on the inside. The current interior already looks pretty good. Typical for Skoda, the build quality is pretty good, while the dashboard aesthetics are pretty conservative and rather simplistic. However, the list of tech goodies is pretty impressive. An 8.0-inch touchscreen is standard, while a bigger 9.3-inch unit is also available. In both cases, the infotainment system is fast and responsive and generally works pretty well. Some rumors also suggest a digital instrument screen as standard, but we are not that sure about this feature.

In terms of space, things will certainly remain the same as in the current model. With nearly 110 inches in wheelbase, the Kodiaq is one of the most spacious models in the class. So it’s no surprise that it packs three rows of seats. Still, the third row isn’t particularly comfortable and spacious, even from the perspective of the average kid. On the other side, the first rows are pretty generous with space. The front seats are massive and comfortable, so there is no doubt that the 2021 Skoda Kodiaq interior will remain the same in this aspect too.

2021 Skoda Kodiaq Will Get Hybrid Versions

One of the biggest novelties of the 2021 Skoda Kodiaq facelift should be the addition of a new hybrid version. Of course, we count on VW’s new setup, based on a 1.4-liter turbo-four, which gets help from an electric motor and comes packed with a 13-kWh battery pack, which should ensure the all-electric range of around 30 miles. In terms of power, the max output should be the same as in Tiguan, which goes around 242 horsepower.

The rest of the powertrain will remain the same, which means that base models will come with a 1.5-liter turbo-petrol engine, which is good for about 150 horsepower. You can also get a 2.0-liter turbo-four with 180 horsepower, though we would rather stick with the base engine, as it is notably more efficient and a difference in terms of performances isn’t that big.

If you’re a diesel boy, a well-known 2.0-liter comes in three variants, with either 150, 190 or 240 horses. The latter is reserved for the performance vRS model. Once again, we would recommend the base engine.

We expect to see 2021 Skoda Kodiaq by the end of the year, without bigger changes in price. Currently, the base model goes around 24.000 euros in Europe and around 23.000 GBP in the UK. Some of the key competitors are models like Nisan X-Trail, VW Tiguan, Seat Tarraco etc. 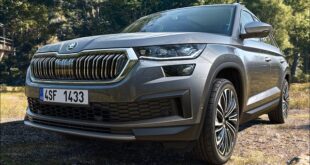