The super-luxurious SUV continues with updates. After standard gasoline models, it’s time for the hybrid version to come in a new form, which was originally introduced a year ago. Many call this model a new generation but it is essentially an updated version, which features novelties in various aspects, while the overall design remains largely the same. Other than the new hybrid version, the 2022 Bentley Bentayga is about to continue in the same way.

This means you may count on a familiar layout, which offers an impressive level of luxury. Besides the super-plush cabin, this SUV also offers a butter-smooth ride, while equipped with three capable powertrain options now. Besides the new plug-in hybrid, there are also versions with eight and twelve cylinders.

Despite the new version, the 2022 Bentley Bentayga release date won’t be scheduled for any earlier date than usual. The first deliveries are expected in the last quarter of the year.

Without any doubt, this is the biggest novelty for the next year. The new version will utilize hybrid technology and follow the trend of downsizing. The core of this setup will be VW’s well-known 3.0-liter V6, which puts out around 335 horsepower. Along with this engine, the setup will include a 126-hp electric motor, so the total output goes up to 443 horsepower and 516 pound-feet of torque. That’s a quite respectable amount of power.

The system comes coupled with a 17.3-kWh battery pack. Such a capacity ensures an all-electric range between 18 and 31 miles, while the top speed in the EV model is 84 mph.

On the other hand, the rest of the lineup will continue in the same way, which means you may count on two more, familiar engine options. The first one is a 4.0-liter twin-turbo V8, which features a max output of 542 horsepower. The top of the range is the version with a massive 6.0-liter W12 engine, which features a max output of 626 horsepower, which is enough to move this super-luxurious SUV from zero to 60 in just 3.5 seconds.

When it comes to fuel economy, the V8 returns around 17 mpg combined, while the W12 is good for about 14 miles per gallon in a combined ride. Ratings for the new plug-in hybrid are yet to be announced.

The 2022 Bentley Bentayga will continue with the same overall design, which has been significantly updated last year. For that occasion, we saw no bigger mechanical changes, though the suspension setup is new and ensures even better ride quality. The styling has brought a lot of new details, but the overall appearance isn’t much different from the original version.

Bigger upgrades can be seen on the inside, where this SUV brings a tremendous dose of luxury. The most impressive thing about this cabin is the materials. All areas come with high-end leather, genuine wood and similar materials. The amount of space is very generous in both rows of seats. Moreover, even the cargo area offers a decent dose of practicality.

The list of safety features will be long as well. We expect that the new model come standard with automated emergency braking with pedestrian detection, while things like lane departure warning, lane keep assist, adaptive cruise control, night vision system and similar things will be available.

As we already mentioned, the first deliveries should start by the end of the year. The 2022 Bentley Bentayga price should start at around 185.000 dollars. Some of the key rivals should be models like Aston Martin DBX, Lamborghini Urus etc. 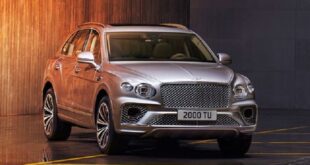