The next year’s Tiguan is expected to bring us a completely new design, as the new generation is in the works and it looks like it is almost production ready. The test mule has already been spotted several times and we presume that the launch will be scheduled for the second half of this year. From what we can hear, this will be the last generation to feature an internal-combustion engine. After that, things will go toward full electrification.

That’s the reason why everyone expects to see evolutionary changes, from a company that’s already known for being very cautious with implementing new design solutions and technologies. That’s why the new generation will continue riding on the familiar MQB platform, with only updated mechanics. However, we expect to see all kinds of upgrades, starting from the new aesthetics, new cabin design, upgraded powertrain etc.

The new generation should hit the market sometime in the second half of the year.

We expect this redesign to bring mostly evolutionary changes. Therefore, it’s no surprise that the 2024 VW Tiguan will continue riding on the familiar MQB platform, which VW uses for a wide range of economy cars. The layout will remain the same, which means that base versions will continue with an FWD setup, while all-wheel drive will be optional.

On the other hand, the familiar architecture will come with some updates. For example, we could see the implementation of some new driver-assistance features. Furthermore, the chassis and suspension setup should get updated as well, to provide an even better driving experience. The current model offers a very balanced ride, with a decent portion of both comfort and athleticism. So, we are pretty sure that the new model won’t feature a significantly different character.

Naturally, one of the biggest changes will be the new exterior design. As we already mentioned, the test mule has been spotted several times and even though it still wears camouflage, it’s easy to see slightly bigger dimensions. The 2024 VW Tiguan will feel bulkier, even though the wheelbase will probably remain unchanged. Just like the outgoing version, the new model should also be offered in standard and long wheelbase variants, although the latter is the only one available in North America and is considered standard. That model features 109.9 inches in wheelbase.

When it comes to styling, the company still hides the new design language. Not only that there is a lot of camouflage, but it also features drawings that resemble the current generation. On the other hand, we can see that the test mule features a more rounded design, with smoother surfaces that should provide a more elegant appearance.

Spy photographers still haven’t managed to take interior photos, so we can’t tell much about the cabin design. We can only presume that the new model won’t feature radical changes in terms of the dashboard design, though some sources suggest a completely center stack design, which would include different infotainment screens. Instead of the current unit that is completely integrated into the dashboard, the new one would feature a floating design and would be positioned higher.

Naturally, we expect to see further improvements regarding materials and build quality. The amount of passenger space should be similar to the current generation, which accommodates five adults in such a nice fashion. Moreover, we also expect to see the optional third row. The current model offers around 37.6 cubic feet of room behind the rear row and 73.4 cubic feet behind the front seats, so we expect at least some numbers from the new generation.

We definitely expect to see changes under the hood. The current model comes with a 184-hp turbo-four, which is neither engaging nor efficient. One of the scenarios is to see this engine upgraded with a mild-hybrid system, which would add a few more horsepower and improve efficiency.

Other sources suggest additional powertrain options for the new generation. One of the possibilities is to see a more powerful version of the turbo-four engine, with a max output of 228 horsepower and 258 pound-feet of torque. Also, we wouldn’t exclude the possibility to see a plug-in hybrid setup, which is already available in some other parts of the world.

As we’ve just mentioned, the 2024 VW Tiguan should arrive sometime in the second half of the year, though a more precise date is yet to be announced. We estimate that base models will go around 27.500-28.000 dollars. The competition is extremely tough, while some of the key rivals are models like Hyundai Tuscon, Nissan Rogue, Mazda CX-5 etc. 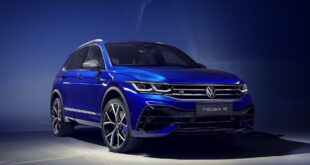 After the recent mid-cycle update, it became clear that the current generation of VW’s compact …